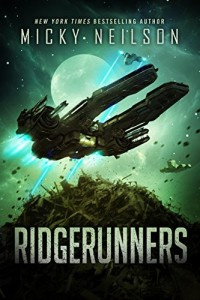 Aladhra doesn’t run from anyone, not even the Collective.

On the outskirts of earth’s solar system, rule number one is to stay out of the Collective’s way. They are ruthless, and powerful, and rule with an iron fist. They have no patience for Ridgerunners—the pirates and smugglers who thrive on the edges of their reach.

But Aladhra’s crew, the Pack, would rather run straight towards the Collective, guns blazing. Even wildly outmanned and outclassed, they would sacrifice everything for one shot at toppling the corrupt regime.

When Aladhra and the Pack get their hands on next-generation technology, they set out to end the Collective once and for all. But the Collective knows they’re coming. With a bounty on their heads that no Ridgerunner could resist, the Pack is surrounded by enemies, including former allies.

What chance does one ship have against an entire solar system?

“Fast-paced and clever, with plenty of twists and turns!” - Christie Golden, NYT Bestselling author of Tides of War

“A motley crew of interstellar pirates go up against . . . well, the rest of the known universe. This is adventure and blasters and an underdog story told at light speed––Micky Neilson’s handle on sharp dialogue and action kept me laughing, shouting, and cussing at the Law of Thermodynamics.” - Cameron Dayton, bestselling author of Etherwalker and creative director for Call of Duty.