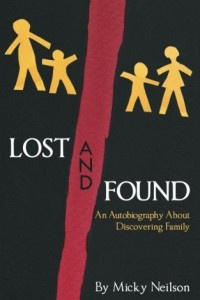 Lost and Found: An Autobiography About Discovering Family

Lost and Found, the autobiography of N.Y. Times best-selling author Micky Neilson, a 20 year-veteran of the World of Warcraft franchise, is The Glass Castle meets Of Dice and Men. Lost and Found: An Autobiography of Discovering Family, is the harrowing and inspirational memoir of the successful contributor to World of Warcraft and N.Y. Times best-seller Micky Neilson, who was kidnapped by his schizophrenic father as a toddler, spending his earliest years on the run and his teenage years as a foster child.

This autobiography chronicles Micky’s experience serving in the first Gulf War, the meteoric rise of Blizzard Entertainment and, most triumphantly, his reuniting with the family that was stolen from him as a child. “No one who reads my fiction today or plays the video games I’ve contributed to knows that I was kidnapped at eight months old, that I grew up with a schizophrenic father, that I didn’t attend school until 7th grade, or that I never knew my true identity until I was reunited with my family after 38 years,” said the author. “It’s such an honor to finally be able to share my life story.”