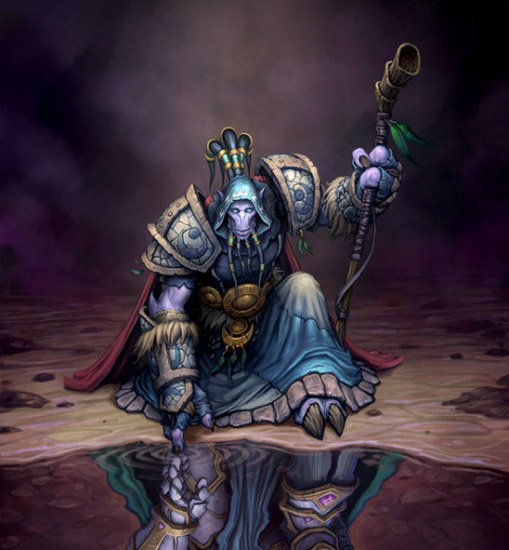 Everything that is, is alive.

The words had become a mantra in his mind, a constant reinforcement of his newfound understanding. More importantly they were an epiphany, the key to unlocking a whole new universe of knowledge. And the epiphany was why he was here.

Nobundo took comfort in the words as he slowly negotiated Zangarmarsh’s forest of colossal mushrooms, their spores glowing green and red in the early morning mist. He traversed the creaky wooden bridges that stretched over the shallow marshland waters. In just a few moments he found himself at his destination, gazing up at the radiant underbelly of a mushroom that dwarfed all others. There atop its cap, the draenei settlement of Telredor awaited him.

He progressed with trepidation, leaning heavily on his walking stick and cursing the pain in his joints as he stepped onto the platform that would carry him to the top. He was worried, for he was still unsure how the others would react. There had been a time when his kind had not even been allowed to enter the settlements of the unaffected.

They are just going to laugh at me.

He took a deep breath of the cool, misty marsh air and asked it to give him courage for the challenge to come.

Once the platform came to a stop, Nobundo carefully shuffled through the arched entryway, down several shallow steps, and out onto the landing overlooking the settlement’s small plaza, where the assembly had already gathered.
He gazed down at the hard-set faces of the various draenei, whose disdainful, superior eyes stared up at him.

To be Broken was to be outcast and vilified. It was not right or just, but it was the reality he had been forced to accept. Many of his unaffected brothers and sisters could not understand how the decline of the Krokul could have occurred, and especially, as in Nobundo’s case, how one who had been so gifted and so favored by the Light could have fallen so far.

Though Nobundo himself did not know exactly how it happened, he did know when. He recollected with startling clarity the exact moment that marked the beginning of his own personal descent.