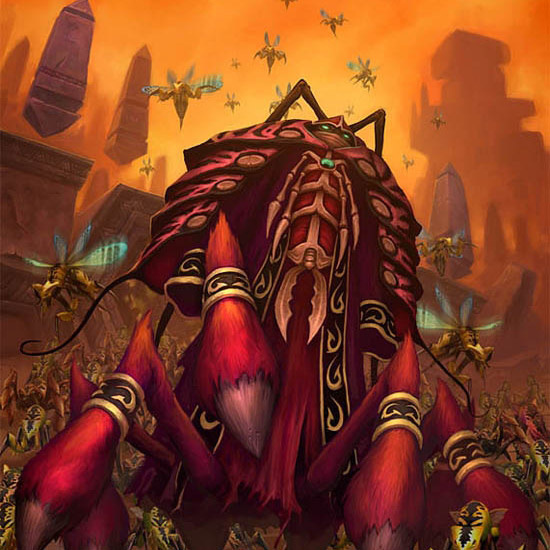 World Of Warcraft: The War Of The Shifting Sands

The midday sun fixed its unflinching gaze upon the sands of Silithus, bearing mute witness to the multitudes forming ranks outside the Scarab Wall.

It continued its passage, though to the masses gathered below, it seemed as though the orb had stopped to cast down unrelenting waves of heat until the vast armies simply collapsed from exposure.

Amid the restless formations a lone night elf stood in quiet contemplation. Her companions eyed her with admiration; some, almost reverence. The others who were gathered–an assortment of representatives from every race in every land in the known world–viewed her with their own racial prejudices. After all, the blood feud between night elves and the likes of trolls and tauren dated back centuries.

No matter their affiliations, however, all who had come to battle that day shared one sentiment for the night elf: respect. Shiromar was like the sun above–impassive, unwavering, and unflinching. These qualities had served her well in the recent months, providing her with the strength to continue when all seemed lost; when the quest seemed neverending; and when her companions had simply given up.

There had been the watcher, and the Caverns of Time; there was the bronze dragon and the Broodlord and the squirming insect hives; then there were the shards and their keepers, the ancient dragons, none of whom would give up their charge easily. Coercion, ingenuity, and sometimes outright violence, all were employed to accomplish the task.

And all of this for one item, the item gripped in Shiromar’s hands even now: the Scepter of the Shifting Sands, reformed at last after a thousand years.

In the end, all roads had led here, to Silithus, and to the gates of the Scarab Wall. Here, where the Scepter was shattered.

Shiromar looked up at the sky and remembered a time when the sun had been eclipsed by dragons; when the Qiraji and silithid flooded over the legions of night elves in seemingly eternal waves; when hope seemed but a shadow. It seemed as if none would survive those terrible months; yet here she was, standing before the sacred barrier that saved their lives all those years ago, during the War of the Shifting Sands…